LGBTQ+ in STEM: The Cruciality of Visibility

Why is visibility for LGBTQ+ STEM workers so critical? In 2013, a survey of STEM workers found that more than 40% of LGBTQ+ identified respondents working in STEM fields are not ‘out’ to their colleagues. Representation within the workplace is fundamental to not only improving employee experience and retention, but also creating a safe environment for all workers to exist authentically at work. The decision taken by many to refrain from being out at work, unfortunately, does not come as a surprise considering in 28 states it’s still legal for employers to discriminate against someone for their sexual or gender identity.

While we have moved mountains to bring equality and diversity rights to the workplace and beyond, it seems the world of work is in some ways reverting back to the ‘old school’ way of thinking, driving the progress made in recent decades in reverse.

In this article we’ll explore:

The importance of identity

Over the course of a study with LGBTQ+ professionals, originally circulated in 2019, it was learned that “heteronormative assumptions frequently silence conversations about gender and sexuality in STEM,” again reinforcing the consequence of enduring a non-accepting working environment.

Assumptions, often rendered in innocence, can have lasting damage on individuals, as they can make LGBTQ+ individuals feel like they have to continue to come out, when doing so once is a tough task. Gender identity and sexuality falls into a large spectrum, one where each person’s personal preferences fit, no matter the stereotype. However, many who identify with labels such as gay, lesbian and bi, comment that their fear of coming out in the workplace stems from the infamous ignorance within societies stereotypical physical expectations associated with their sexual identity.

Alas, the lack of visibility and acceptance isn’t singularly present within the STEM workforce, but within educational campuses alike.

The Association of American University’s Climate Survey on Sexual Assault and Sexual Misconduct reported that 60% of LGBTQ+ students testified to incidences of sexual misconduct and harassment; comparatively, only 45% of their heterosexual classmates said the same. In a further survey on Assault and Sexual Misconduct in 2015, transgender, genderqueer, and gender-non-conforming undergraduate and graduate students reported the highest levels of on-campus sexual assault and misconduct. Regrettably, it isn’t only the students at universities that are reporting these horrifying events. During a study of STEM faculty at universities in 2014, it was found that 69.2% of the teaching body who were ‘out’ felt uncomfortable in their subject division, and alarmingly those who were out were 7.2 times more prone to experience exclusionary behaviour from colleagues.

Although representation and acceptance are the end goal worldwide when tackling pride, specifically within companies, it must come from an authentic place, one that is willing to be truthful in raising awareness and continuously driving equality all year round, not just for one-twelfth of each year.

The milestones the LGBTQ+ community have crossed and the barriers they will continue to break down in the forthcoming years are phenomenal, although these hurdles should have never been there to begin with. Pride within the media must be celebrated by organisations faithfully, as when the tables are turned and businesses are found to be donating to homophobic legislators, that rainbow they have stuck in their shop window becomes glaringly transparent. Superficial signals of LGBTQ+ loyalty can also provide employees with a false sense of safety within their employment, as while they may have previously viewed their company as a safe space to be ‘out’, when the paraphernalia turns out to be a façade, employees are likely to be left vulnerable and at risk of discrimination before leaving for authentically inclusive workplaces.

In a recent report on the LGBTQ+ climate in physics, some of the main issues faced by sexual minority STEM professionals were revealed. The research showed there is a heterosexist climate present within multiple STEM work environments that reinforces gender role stereotypes, along with a culture that requires, or at least strongly encourages, LGBTQ people to remain closeted at work, all accompanied by an overall lack of awareness about LGBTQ issues among STEM professionals. In a similar study involving federal employees, it was noted that LGBTQ+ workers in STEM-related organisations (i.e., NASA) were subject to more detrimental workplace experiences in comparison to LGBTQ+ workers in fields non-relative to STEM organisations.

Inclusivity within the STEM industry is on the rise, however only in the past decade have we begun to see more representation in STEM. In a recent analysis of UK physical scientists, it was uncovered that 28% of LGBTQ+ respondents – and almost 50% of all those who stated they were trans – had considered leaving their place of work due to the discriminative attitudes towards LGBTQ+ people. However parallel to this, there was evidently a slight cause for optimism as 75% of respondents said the working environment for LGBTQ+ physical scientists was comfortable, and 70% said it was improving.

While the reasoning behind the improvements is unclear, we can assume it’s more than likely due to the increase in representation of LGBTQ+ role models within the STEM sector.

When living in a world where the CEO of Fortune 500 company Apple is openly out, it allows those in the LGBTQ+ community to believe a career in STEM is not so far-fetched for them. Along with Tim Cook, mathematician, computer scientist, and theoretical biologist Alan Turing, scientific pioneers are a major inspiration for those in the STEM sector today. Jack Andraka, known for hisexperimental work in detecting pancreatic cancer, stated how Turing was his only role model in the industry growing up, yet with the shift in acceptance in present day, Andraka longs to be that inspiration for others in the community who have a passion for a career in STEM.

Our global teams are equipped with culture and diversity leaders like Ann Bookout, Head of Culture & Fulfilment, mental health first aiders, and a focus on identifying and dismantling attrition gaps for diverse groups.

We recognise the value, potential, and growth opportunities that exist within our organisation, as well as those opportunities found in our network of clients and partners.

Want to see where a career in science could take you?

Use our quick job search tool to find your next opportunity across the world of STEM.

How useful did you find this article?
Thank you for your feedback!

Find out how to mend ongoing skills gaps, drive diversity and engage the potential of Ukrainian talent in STEM with Vlad Babych, Principal Consultant at Search by SRG 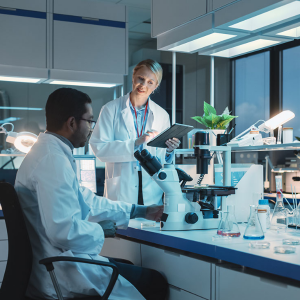 How to Become a Clinical Trial Manager

Discover how to become a clinical trial manager and tips for success with Angela Barclay, Operations Manager at SRG